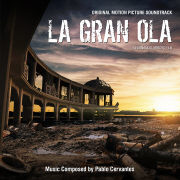 Pablo Cervantes is known for being Jose Luis Garci’s last period composer, but, since his cinematographic music debut in 2000 with You’re the one until Holmes & Watson: Madrid Days in 2012, he has developed his own career, diversifying between fiction TV series, documentaries and, obviously, other cinematographic productions. (He got one of his three Goya nominations in 2005 for his score in Jose Luis Garci’s Ninette- Rosetta record company has followed his musical career, publishing a compiling album devoted to both artists’). Some of Cervantes’ documentaries are worth the mention for their social theme, as Deported, 1969, (2011) and, above all, 30 years in darkness, (2012), both related to the Spanish postwar period, although in different moments of Franco’s dictatorship. Cervantes has also worked in historical documentaries, as Expelled 1609, the moriscos’ tragedy, (2009), and in some promotional programs, as was the case with some educational TV episodes for the well-known Andalusian Region program Destination, Andalucia. He has also worked in another documentary in 2017, The lady in the picture. With this path, where he proves he is a jack-of-all-trades, it comes as no surprise to find the Sevilla-born composer in charge of the music of this documentary, warning about the chances of a seismic cataclysm provoked by the main titles’ Big Wave flattening most of the peninsular Southwest.

Fernando Arroyo’s work gathers scientists’ and specialised Public Service personnel’s statements, both Spanish and Portuguese (as all the Algarve Region would suffer the same fate as Huelva and Cadiz’s shorelines). The film collects as well some survivors’ accounts, as Maria Belon’s, who managed to survive, along his family, the 2004 Thailand catastrophe, and whose story was the base for the renowned film The Impossible. They all provide some unflattering geographical forecasts, which seem to be ignored by the corresponding administrations, more preoccupied in protecting the ever important income resource of Tourism than in preventing a likely disaster. As the films shows, the catastrophe has already happened in the past. Given the subject’s seriousness, Cervantes chooses a tense, suspenseful soundtrack, linking one statement to the next, and highlighted by aerial shots taken by drones, reason why some of the music tracks are so short. That’s not the case in the initial one, more than six minutes long, where Cervantes uses minimalist forms, creating a disturbing atmosphere based on electronic sounds. That way, he intertwines the prologue, crafted through a summary of successive repetitions, the film’s main titles and the narrator’s explanation on the tectonic plates’ movements and their unpredictable, yet evident, activity.

The composer creates the soundtrack from these criteria, as the different bodies of evidence are presented. This is the case for the specialists’ measurements in the fieldwork exploratory drillings, which led to the stacked shells theory proving the existence of tidal waves in a not so recent past, or the graphics showing the Gulf of Cadiz’s fault, moment when the composer uses his main theme on a minimalist tone, suggesting the tsunami’s invisible threat. That’s what seems to show the remains of Roman coastal settlement Baelo Claudia, near Tarifa, Cadiz. The town was probably destroyed by this natural phenomenon, as the position of its columns, knocked down in parallel at the time of the finding of the ruins, seems to prove. The composer adds a Mediterranean touch to his work, obvious despite its shortness, in Generation Tsunami,

the album’s second track, simulating through samplers the Arabian lute and the guitar. Cape Trafalgar and Victims are examples of the mix between the threatening, suggestive electronic sounds and the more organic ones created with the samplers. The synthetised percussion`s counterpoint in Streets of Cadiz and Walls of Cadiz shows the ominous reality that what happened then could happen again any time, something crystal clear in Very few escaped. The tense rhythm goes in crescendo as narrator and interviewees show the possible consequences of disregarding the voices of alert. They emphasise prevention (It’s not about shocking, it’s about educating, How to act), warning of the situation people could face due to A poor management of natural events. Arroyo, with Cervantes’ complicity, ends the film with a stunning, hair-raising simulation of the disaster, which would be less effective with good (in)formation. Great educative music. --- from the label