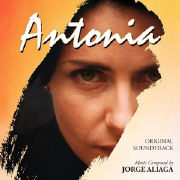 Hidden between discouragement and optimism we find Antonia’s (Mariano Andrade) sophisticated music, a delicate work by Chilean composer Jorge Aliaga. The musician behind Shadow Girl (2017) and Leontina (2011) shows, through the languid and nocturnal nature of jazz music-the dark feeling shrouding emotions and affection- the heroine’s fragile emotional state. Antonia, a chic, elegant, feminine woman, is the main character in this Chilean drama, with jazz as the link holding everything together. The nostalgic, emotional score, using piano, strings and trumpets as Antonia’s voice, narrates, among weeping and unrequited affection, her slow, tormented descent into the abyss. Love and indifference are the main engines of this tragedy. They mark the tempo (elegante ma non troppo) which, through a disturbing game of opposing rivals (Antonia’s voice pitched against Martin’s), lead to the uneasiness their doomed relationship brings. The music shrouds the story with the particular halo film noir genre movies possess, strokes smartly traced throughout the film, as is the case in the dynamic, elusive chase scene (The chase). Aliaga finds in this narrative duality the musical mechanism which somehow joins both lovers together…two hopeless shadows entangled in the sensitive twang of the six cords, stirred by their grief-stricken, surprising reencounter. The jazzy elements find in this universal chat their reason for being, now showing the dark, disturbing side of this young love, now Antonia’s depression for an unwanted pregnancy. The musician portrays effectively both intrigue and uncertainty, finishing off the inspired plot. Antonia is the image in black of a Chilean drama, and Jorge Aliaga its main character. He is, as a manner of speaking, the best possible playwright.

Antonia rediscovers the singular handwriting of a musician gifted with a very special understanding, one which allows him to dig into human being’s most short-lived feelings. Love, Homo Sapiens’ universal engine, is sketched through a warm beat, so characteristic of the composer, making his poetry both beautiful and intelligent. His music, where cello and piano become the spokespeople of his word, is written to make you feel, to engage with human beings’ emotional side, wrapping feelings with the soft twang of his beautiful voice… Aliaga is the drama, and his music’s all the rest. --- from the label