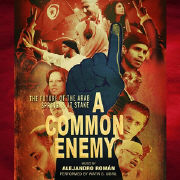 Fusion. This is the key term, the most suitable to the purpose with which Alejandro Roman has approached the expectations and uncertainties mirrored on the first Tunisian elections after the revolutionary events known as The Arab Spring, and that director Jaime Otero Romani portrays in this emergency documentary produced in 2013, taking the format of a political thriller. For this occasion, he could count with another exceptional musician’s priceless contribution: Wafir Sheik Gibril, a percussions expert.
The Arabic scent Roman’s work gives off is so unquestionable as is his mastery of keyboards and music programming, through which he very subtly introduces more western influences, with rhythms owing to rock, blues and jazz (as is the case, for example, in Tunis, Port de France, or in the percussive rhythm in Allah is Great). These rhythms are skillfully scattered throughout his work, with the purpose of providing drama and suspense to some of the documentary’s scenes and sequences. It is the case of The night of Persepolis, The voting moment, Results, all of them effectively providing emotional tension, but also of Alash, Alash, a song for a female singer, where Roman dares to introduce Hammond’s organ samplers to get that more universal touch that music is able to achieve. The composer although satisfied with the commercialised recorded version, managed to release also a more personal, alternative one, including demos and fragments not present in the final editing, and which he titled La Perfecta Desconocida (female for The Perfect Stranger), as if it was a similar, but different, work; a consanguineous sister with her own personality.
In this sense, the album includes in its first fifteen tracks the documentary’s score, redirected towards that atmospheric context the director intended. This was not a hindrance, however, to Roman’s original intentions being forgotten when it came to release the same quantity of songs with alternative versions, demos and a series of bonus tracks that were not included in the documentary, through which it can be appreciated the Madrid-born composer’s purpose to mitigate that geographical factor in favor of a revolutionary process that, after all, interests and concerns the whole world. Bouazizi’s alternative version, the opening credits, is quite illustrative for that matter, offering an option much more tense than the original thanks to the electronics effects. Fragments from Revolution, Morou Meeting, Ghanuchi’s Return, Arab Spring, Revolution II and, above all, Tunisian Future, where converge Roman’s keyboard intangible sound and the Arabic percussions and rhythm provided by the Hammond’s organ samplers, are the best example of the composer’s ambitions. Maybe this is the reason why this last track closes down an album that is actually two, and that, due to its dual nature, serves on a silver platter a reflection on Roman’s musivisual approach, accomplished through the different nuances developed in some version or other. Enjoyment is guaranteed. --- from the label