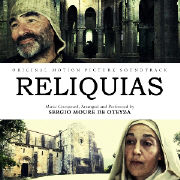 Relics: a film directed by Tono Lopez, telling the strange events that take place in a double monastery in the heart of the XII Century. Thriller and drama soar over a story marked by Death, and by the decisions, more humane than divine, which find in Sergio Moure de Oteyza, a musician without tonsure, (Wolves of Arga, The Body, Extinction), the perfect endorser.

The strange circumstances of a papal delegate’s murder unleash the events, framed by the double glances from nun and monks, silently wandering the monastery’s chilly corridors. To tell this story from the stave, meeting place between image and melody, Tono and his production team could count with musician Sergio Moure de Oteyza’s talent, a composer of sublime poetry capable of narrating the events from lauds to vespers… A definition which precisely draws the fact that his music influences directly the narrative’s formal dimension: to expose then reflect over the events stretching frame after frame. This is cinematographic music’s essence, and Sergio one of its distinguished guarantors. It could be said that his music goes from least to most, but this lacks sense in the light of what the composer presents throughout the film’s running time.

Sergio Moure’s music for Relics is conceived as a prayer; as a kind of chat agreed upon by both parties, which, as a last resort, gives meaning to the director’s message, and also to everything that only a musician can make sense of. The music lifts, by its own mystical nature, a prayer that, without interruption, unveils the events somewhat hidden behind the story’s plot and suspense. Two parts tell the ins and outs happening inside the monastery’s walls. The first part, more descriptive (mystical) describes the bishop’s arrival, the religious chores and the introduction of the papal delegate. Harp, oboe, flute and piano (the most anachronistic of them all) display that spiritual, bucolic part, which ends up broken because of the suspicion the delegate awakens among the monks, a dark character which receives a special treatment, the music foreshadowing the events.

The household instruments blend with the images in a delicate game of contrasts, making the whole more dazzling. The lauds start to disappear at Moure’s set pace, allowing the music to become darker and more distant as the events progress. In the second part, Sergio realistically recreates the suffocating atmosphere shrouding the monastery, keeping the tension in each frame. For this, he uses an almost medievalist orchestration that seems to knock directly on Misfortune’s gates. Voices, strings and percussions harmonize this last prayer that contextualizes the story, becoming narrative components used with extreme intelligence to mark the tempo, foreshadowing the most suspenseful scenes…the intrigue is well served. This narrative resource is used numerous times to maintain the spectator’s attention. The vespers grow dark among memories and moans, between the strings and tambourines the main characters seem to play near the final outcome. --- from the label